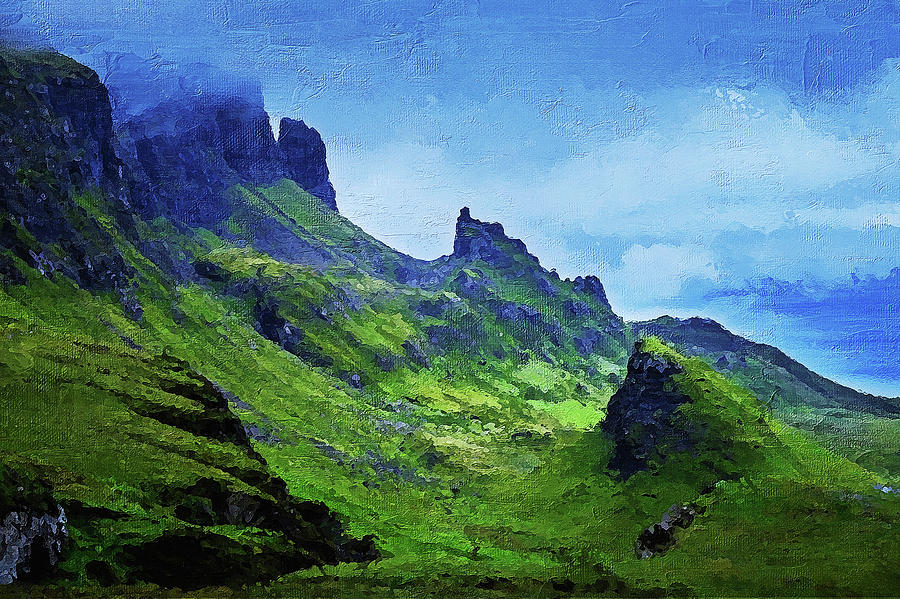 Isle of Skye (in English Isle of Skye, in Scottish Gaelic An t-Eilean Sgithanach or Eilean a 'Cheò) is an island in the United Kingdom, belonging to Scotland and part of the Inner Hebrides archipelago. With an area of ​​1,656 km² it is the largest of the archipelago. Its peninsulas originate from a mountainous center dominated by the Cuillins, rocky slopes that strongly characterize the landscape of the island. The Isle of Skye is named after the Norse word Sky-a which means "island of the clouds" because of the fog that often surrounds its hills.
The island has been inhabited since the Mesolithic period and its history includes a period of Norse rule, and a long period of domination by the Clan MacLeod and the Clan Donald. The eighteenth-century Jacobite insurrection led to the end of the clan system and led to successive Clearances, which replaced entire farmland with sheep farms, which forced many to emigrate to distant lands. The number of residents dropped from over 20,000 in the early nineteenth century to over 9,000 in the last decade of the twentieth century. The population of Skye grew by 4% between 1991 and 2001. About a third of the 2001 residents were from the Scottish Gaelic language and, although their number is downhill, this aspect of island culture remains important.
The main industries are tourism, agriculture, fishing and whiskey distillation. Skye is part of the Scottish Highland region and the largest settlement on the island is Portree, known for its very picturesque harbor. There are connections to neighboring islands via ferries and, since 1995, Skye is connected to Scotland via a vehicle bridge. The climate is mild, humid and windy; the abundant fauna includes the golden eagle, red deer and Atlantic salmon. The local flora is dominated by heather moorlands, and there are important invertebrate populations in the sea near the island. Skye has been the scene of several novels and films, and is often celebrated in poetry and music.