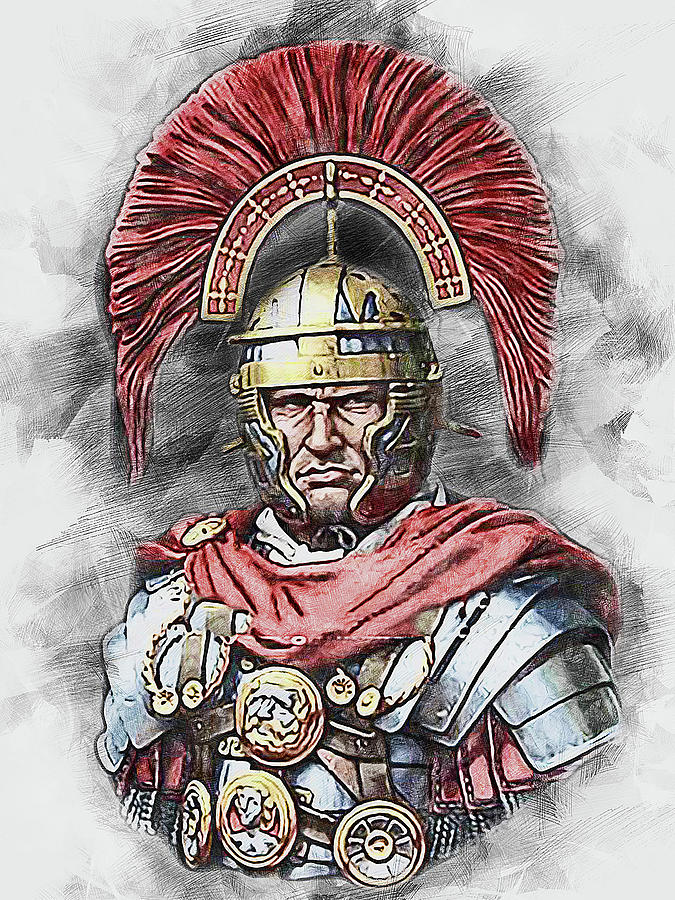 Portrait of a Roman Legionary - 48

Portrait of a Roman Legionary - 48

Portrait of a Roman Legionary - 48 by Andrea Mazzocchetti

The Roman legionary was the infantryman who was part of the Roman legion. The Romans had to face various populations that adopted different methods of fighting; this affected both the organization and the structure of the legion, and the type of armament used. The legionnaire has always been a source of inspiration and model from the military point of view for their skills, their experience and efficiency.

The legionnaire wore a lorica hamata with a reinforcement on his shoulders called umeralis, a gladius and a semi-rectangular shield with a rounded top and bottom. On the head the legionnaire wore different types of helmets depending on the century. In this period a type of javelin called pilum is born. The pilum could have three uses: it could have killed the enemy, or could have forced the enemies to abandon their shields because, having hit them and having bent, would have made them unusable, finally, if he had touched the ground, he would have broken for not be used further by the enemy. There are hypotheses of experimental archeology that assert the stack bending quality was only "additional" and that it was designed primarily to pierce shields and hit the enemy.

With the beginning of the empire the armament of the Roman legionary changes drastically. The legionary of the first century AD the stereotype of a Roman soldier is in the common imagination. This soldier wore over his tunic a heavy segmented lorica of the Kalkriese or Corbridge type, two new types of helm called Imperial Gallic and Imperial Italic, a pilum and a rectangular shield with drawings and the name of his legion. The belts of the Mainz type or a gladius ispaniensis on the right hung from the very decorated belt (the balteus) (this position allowed the soldier to extract it without disturbing the arm with which he held the shield), the pugio (a small dagger) on the left and the cingulum. The latter consisted of four or five leather pendants which during the fight produced a metallic sound with the purpose of apprehending the enemy. To avoid neck abrasion produced by the armor, the legionnaire wore a padding on the shoulders called subarmalis or thoracomachus and a handkerchief around his neck. As always according to the enemies that the legion had to face the smiths brought changes and measures on the armament.